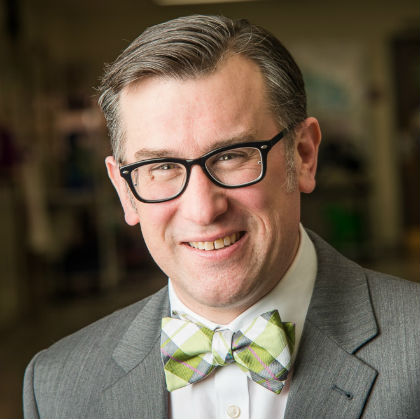 Ted Hamm is the director of the The Étude Group, an educational network that applies an experiential approach to empower people to think critically, engage creatively, and establish strong human connection in order to cultivate the next generation of changemakers.

Ted is committed to developing learning environments that nurture student agency and encourage thoughtful, diverse contributions to school culture. Student-led town hall meetings, focus groups, and presentations of learning are a few of the democratic practices Ted employs in order to place students at the center of their learning. Supporting students in these efforts is a strong advisory program, which is an opportunity for students to focus on the Habits of Professionalism and Habits of Mind that they will need for successful engagement beyond school. Ted's charge to empower young people is best characterized by the culture of decency and trust in his schools.

The core of Ted's philosophy is having confidence in every student as a creator. Ted's experiences with the arts in education combined with his study of theories of creativity and the work of Ted Sizer and Deborah Meier, translates into a unique disciplinary and project-based curriculum. In collaboration with staff, who have training from Project Zero and Educators for Social Responsibility, Ted and The Étude Group schools engage students by teaching higher order thinking and questioning skills. Ted often speaks about this model of education as an enduring education and frequently talks to alumni to ensure that the experiences in The Étude Group schools are relevant to students beyond K-12 schooling.

As a leader and supporter of progressive educational, Ted has served as president of the Wisconsin Alliance for Arts Education, served as a board member of the Wisconsin Charter School Association, and currently serves as a board member of the Wisconsin Innovative Schools Network. Ted has contributed the ongoing conversation around creativity and education through Wisconsin’s Task Force on Arts and Creativity in Education and the National Endowment for the Arts Educational Leadership Institute as a team member and later as a coach for other teams. The work with the NEA looked at how creativity and the design process can be fostered in K-12 schools across the country.

Through the work of the Étude Group, Ted along with a team of faculty members from the IDEAS Academy, were selected to write a chapter for the book Educating for Creativity. The book features examples from around the globe of schools at all levels that foster creativity in their students.

Ted has spent more than 20 years in education as a teacher, principal and curriculum coordinator. He started out as a music educator for 10 years at the middle school level. Following his tenure as a music educator, Ted became the Coordinator of Arts Education/Physical Education and Principal of Cleveland Elementary School. Over the past 8 years Ted’s focus has been on developing the Étude Group of Schools, starting with ESAA and the Étude High School.