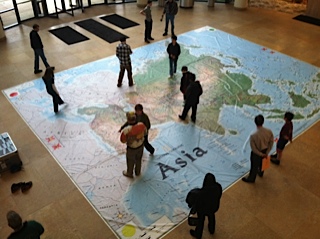 One question stood between Mosaic sixth-grader Drew Engberg and the qualifying round at the state Geography Bee: In September of 2011, the king of a Middle Eastern country passed a law that women will be able to vote in the 2015 elections. The country is north of Yemen. What is that country?

Drew didn’t know the answer, so he guessed the United Arab Emirates. The correct answer is Saudi Arabia.

Drew was one of about 100 middle school students who competed at the state Geography Bee in Madison on March 30. The competition began by dividing participants into five rooms. Every competitor was asked eight questions and a moderator kept track of scores. The participants with the top 10 scores went to the final round.

The participants were told not to worry if they missed one or two questions because usually there are students in the finals who only got six or seven questions correct. When Drew only missed one question, he thought he would be in the finals. However, it was a particularly strong group of competitors this year. Fifteen students got perfect scores and had to go into a tie-breaker round to determine which 10 would face off in the finals.

Ultimately, it was Vansh Jain, an eighth-grader from Minocqua, who won in Madison and will again represent Wisconsin at the national competition May 22-24 in Washington, D.C.

“This is the third time he’s won the state bee,” said Drew’s mom, Nancy Engberg. “The last two times he went to D.C., he ranked in the top 10 nationally.”

The state competition fell at the end of the Mosaic spring break. The Engberg family – which also includes dad John and sister Grace, a fifth-grader at ESAA - traveled over the break to New Orleans, where Drew’s grandmother lives. They returned to Wisconsin in time for Drew to compete at the state Geography Bee.

“We ate awesome food, went to awesome places like a French bakery and an amusement park, rode a steamboat down the Mississippi, went swimming every day and listened to jazz,” Drew said of New Orleans, adding that during any downtime he studied for the competition.

While in Madison, Drew and his family were able to spend time with his aunt, uncle and cousins in the area. The night after the Bee, they went out for Drew’s favorite meal: spaghetti.

Drew has been interested in geography for as long as he can remember. By age 3, he could name all of the United States and their capitals. Of course, back then, his pronunciation wasn’t as refined as it is today. His parents fondly recall the cute way little Drew pronounced “Honowuwu” and “North Kadota.”

“When our friend’s son, who was several years older than Drew, saw him do the capitals, he asked his mom if he could bring Drew to school with him for Show & Tell,” Nancy Engberg recalled fondly.

Drew has maps all over his bedroom and has been a loyal subscriber of National Geographic since age 7. His grandmother shares his love of maps and they always spend time scouring them together whenever she visits. They like to find the funniest sounding cities, like Winter Park, Florida and Djibouti, Djibouti (pronounced Ja-booty).

“The kids at Mosaic have been super encouraging of him,” Drew’s mom said. “We feel so fortunate that he goes to a school where being smart is considered cool and is celebrated.”

“I am very pleased with Drew’s performance at the state Geography Bee, especially since this is Mosaic’s first year in the competition and the fact that Drew is a sixth-grader competing with students as old as eighth-graders,” said Rayna Rokicki, social studies teacher at Mosaic.

Drew is looking forward to competing at the Mosaic Geography Bee next year.

“I know it will be hard to win again because there are so many smart people at my school, but I will try!” he