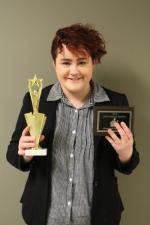 When most people hear the word ‘forensics’ they think of criminology. When five IDEAS Academy students hear the word ‘forensics’ they think of competitive public speaking. Five students, ranging from freshmen to juniors, have been meeting every Monday as a part of Camp Étude to write and memorize speeches in order to compete at tournaments around Wisconsin. Leading this troupe is Étude alum Malyssa Gabrielson.

On March 12, the IDEAS Forensics Team travelled to New London, Wisconsin. Despite a broken down bus, the team made it to the school in time for their first rounds. New London was the first tournament all five members of IDEAS Academy’s team were able to attend. Sophomore Sara Bartol advanced through the preliminary rounds and went on to the finals. Bartol placed first in her category of Oratorical Declamation with her rendition of Lin Manuel Miranda’s 2015 commencement address to Wesleyan University.

After the New London tournament, three IDEAS students went on to prepare for the National Catholic Forensics League (NCFL) qualifiers the next day. Bartol and juniors Hannah Staats and Sarah Williams went on with students from the South High Forensics Team to the tournament. The night before, the two teams spent time practicing their pieces and doing various activities for team bonding.

NCFL qualifiers were a new experience for both teams, as it was hosted at Little Chute High School, a school neither team had been to in the past. IDEAS’ Sara Bartol again advanced through her preliminary rounds and went on to the finals. Bartol qualified for NCFL nationals in her category of oratorical declamation.

“Spending a lot of time working on forensics and competing has improved my work ethic and ability to manage my time, because I don’t have as much time anymore,” said Bartol. She will compete at Nationals in April in Sacramento, California.