IDEAS Academy, where it's classy to rock

If you hang around IDEAS Academy on a Friday night in January, you might be lucky enough to notice a poster of a dumpster. If your luck continues, you might also find some students and teachers playing table top games, and you can ask them about it. And if you ask them about the poster of a dumpster, you might be lucky enough to learn that it represents a Rock Band. Yes, a Rock Band. And, if you are really, actually lucky, Bayden Dassler will ask you if you want to interview him about it while he is setting up sound equipment for a Mosaic Community Night concert. "It's Rock Star stuff," the Rock Band student and Étude Studios music intern said. 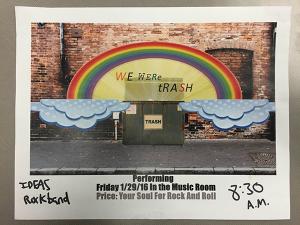 On Friday, January 29th the one-class-band "We Were Trash" performed live in the IDEAS Academy music room. The crowd sang and clapped along to the two cover songs that the band prepared for their inaugural concert: "Dancing with Myself" and "Paint it Black." This unique band is no longer trash.

When I asked Rock Band student, Bayden Dassler, about the poster with dumpsters on it, he explained that making a band is "all about collaboration" and in the beginning of the class they had "Rock Band Veterans" as well as some students who were completely new to music. When they first started playing together they were "trash" he said. After a trimester of learning to work with each other's musical strengths and weaknesses, it was safe to place a rainbow over the dumpster to show their evolution from a group of people to a Rock Band.

Music teacher, Drew Fredrichsen, is a rock star in real life. He is part of the Sheboygan band Jetty Boys and The Sugar Stems, a band featured by the Étude Sessions last spring. He has an academic background in vocal music and was part of UW-Milwaukee's renown classical and jazz guitar program. When I asked him why it was important to teach a Rock Band class, he told me that "students can learn everything they would learn in a regular orchestra class" like music theory, harmony, and tempo, "but do it in a way that gets them beyond the notes on the page." He brings many areas of expertise to his class, and he told me that his goal is to get students to create music of their own. "That's where the fun is," he said.

They do need to get the notes on the page, too, Bayden reminded me. As part of their process of becoming a Rock Band, students studied fret board geography on string instruments and developed and understanding of rhythm and tempo on percussion instruments. They developed these fundamental understandings through learning the songs they chose to cover, and once they could successfully emulate the experts they began to create. "We had to put our own spin on things," Bayden told me. There were guitar solos, new rhythm sections, and lyric adaptations that contributed to their unique covers of the songs.

Today's performance was a success because of their ability to "keep the band together." Bayden explained that being a Rock Band was not easy. Throughout their process, they had to organize their own rehearsals and develop the discipline to "shut up and play" so that they could translate their group's energy into the music and performance. This is what bands do. As you can see in the images below, the production went beyond music and posters to include costumes!

This experience provides students with a music education that mirrors that of up and coming artists in the music industry, not just in school.

Bayden is especially interested in the music industry beyond his Rock Band class. As an Étude Studios intern, he is responsible for helping his peers do sound checks for live performances and for helping them record their original work in our studio.