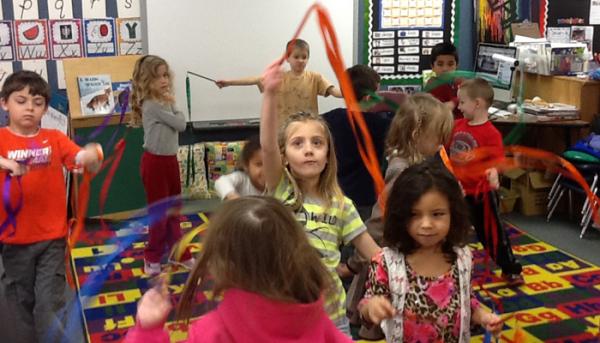 One of the ways that children naturally direct their own learning is through dramatic play. Left to their own devices, kids will often devise imaginative games in which they take on roles and act out the relationships between characters they create. Whether it's adventuring as knights and princesses, prowling the jungle as real or mythological animals, or just playing house, acting things out helps children explore the world around them and develop a deeper understanding of human relationships. Drama brings the body, voice, and imagination together into a whole-person activity that can connect with a variety of learners, so it's easy to see why it performs such a natural role in human development. In fact, recent studies have shown that dramatic play is one of the primary ways that humans develop empathy; by inhabiting the role of someone else, children begin to comprehend the existence of perspectives other than their own.

At ESAA, we are working to harness the power of drama to build literacy skills by connecting students' reading with their natural tendency to explore the world through dramatic play. There are many ways to approach the connection, but two of the methods I've used in drama classes this year are Image Theatre and Process Drama.

Image Theatre was originally developed as a way to empower people to envision solutions to problems in their communities, but it has a wide variety of applications in drama class. Everyone involved in Image Theatre becomes a "spect-actor," both spectator and actor simultaneously. To begin, the spect-actors are presented with a theme. In class, we have drawn themes from specific vocabulary words, problems at school, and problems that characters face in literature or history. Several spect-actors independently use their bodies to make statue images of the theme as they see it. Next, other spect-actors become sculptors who reposition the statues in context with each other to form a tableau. Finally, if the theme is problem-based, another group of sculptors repositions the statues to represent a solution to the problem. Once a solution has been reached, others are welcomed to either join in the tableau as an additional part of the solution or to reposition the statues into an alternative solution. All of this develops with a minimum of talking, so the activity becomes a framework for a group conversation without words. I like to think of it as the physical embodiment of the Generate/Sort/Connect/Elaborate thinking routine that ESAA students use in other classes.

Image Theatre helps students think about the deeper ideas behind the things they're doing in Language Arts in a way that doesn't limit them to their individual language skills (at least initially)- everyone can be part of the conversation. Armed with a stronger sense of the "big ideas," students have something to use language for: reading or writing more deeply about the subject in question. In Kindergarten, we used this activity to brainstorm ideas for a digital book that students wrote to show teachers and students at ESAA how to solve problems in the classroom. In 4th/5th grade, we used Image Theatre to explore the vocabulary words for the Forces and Motion unit, adding motion to the statues and using those actions to create metaphors, which students then used to create poems, which then inspired the movement collaboration they performed at the Winter Program.

Process Drama takes another approach: putting students into other people's shoes. In Process Drama, the students (and often the teacher!) take on roles, explore the world and solve problems in character. These could be characters from stories, people from history, or just about anyone. In 1st grade, we used the book "The Magic School Bus Inside the Human Body" to create an interactive experience mirroring the events in the book. We began by packing imaginary backpacks with the things students might need for a magically miniaturized field trip inside the human body: to get around and explore, protect themselves against harsh environments like the stomach, fend off or capture germs the size of dogs, etc. With our bags packed, we hopped in our own imaginary magic school bus and flew into the body, exploring all the major systems that students were learning about in class. We swam through the bloodstream, crawled through the intestines, and even traveled through the nervous system to the brain. At each stage, students applied their knowledge to guess what it might be like in different parts of the body, and were often led into further inquiry when we reached somewhere unfamiliar. We're currently using a similar activity in 2nd/3rd grade to explore the lives of Wisconsin settlers in the 1800s.

Image Theatre and Process Drama take two different approaches to deepening learning through drama, but they share the same goal: to provide students with new perspectives for learning about the world. By stepping into new roles, students begin to empathize with their characters, which gives them practice empathizing with other people in the real world. Seeing the world through new eyes also leads to new questions, which can lead students down new paths of inquiry and into discoveries that might not have occurred to them in their original perspective. The ways we explore learning through drama can give us a more complete understanding not only of our classroom work, but of the people and the world all around us.