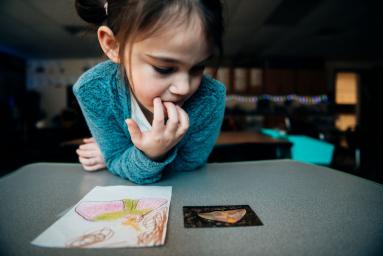 Have you ever met a kindergartner who can talk about the scientific process? One who understands how important observation is and who can articulate what they’re seeing and what it means?

If the answer is yes, you must know an Etude student.

Etude Elementary School has combined science and literacy in a unique unit devoted to teaching students how to investigate, understand, and talk about a subject they embraced immediately – bugs.

The insect unit started with the class learning to observe and discover things about insects. In addition to venturing outside to look for signs of insect life, the class also received a package of mystery insects to observe and study. The essential question they were trying to answer was: How do things change?

As they learned about insects – Why do some have wings? Why don’t they all have stingers? – they created scientific drawings of their favorite insects to compare and contrast different ones.

Then they turned to the humanities component, using Eric Carle books, including The Very Hungry Caterpillar, as a starting point. They made art pieces of their favorite insects using the same collage method Carle uses in his books. Then they created a story about their insects based on a theme they chose together – insects at night. They had to map out their story and plan and execute the illustrations. They also recorded the story on video. They worked together, giving each other feedback and helping one another improve their work.

In the end, they created two final projects: Their scientific drawings complete with consecutive versions and feedback, which were featured in two short videos Etude made to highlight the process, and their Eric Carle-inspired artistic drawings, which were compiled into a book that was sent to prospective Etude families.

Kindergarten teacher Brittany Hattabaugh said one of the biggest takeaways she’s seen from this approach is the way children warm to constructive criticism and helping each other. They use language such as “Have you thought about changing this?” and “I wonder if you could do that?” even at home, according to parents.

“They don’t let small hang-ups stop what they’re doing,” Hattabaugh said. “They keep pushing forward because they’re able to receive the feedback so well. I haven’t heard one complaint, not one argument, not one kid shutting down because things didn’t go the way they wanted.”

The videos are important because they’re part of a new campaign to introduce potential new Etude families to the school’s unique process. In 15 seconds, the videos break down how students went through the process of choosing and drawing an insect and as well as changes their project went through, all to answer the question “How do things change?”

Hattabaugh said when students finish with insects and move on to an engineering-based unit, the collaboration and cooperative language stays with them. 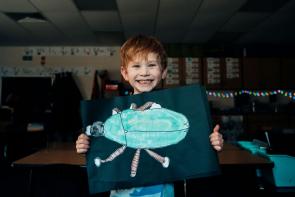 “One thing that’s important in kindergarten is the idea that getting feedback isn’t a sign of failure,” she said. “I hear a lot back from parents and teachers (of her past students) that these kids aren’t afraid to receive criticism. It’s not about perfection or about making it look exactly like that bug, it’s more about looking at the first draft to the second draft … and then looking back at the first versus the final. How did it improve?”

When the students advance, the lessons do too.

“It’s more than reading the book and drawing pictures,” Hattabaugh said. “They’re not just regurgitating information, but changing a little bit of their perspective on the world and how they interact with others around them.”

If you are interested in learning more about Étude Elementary, please check out our Enrollment Page or contact us to schedule a tour.