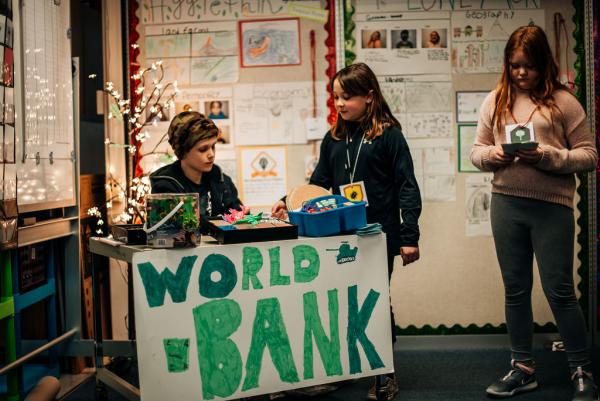 Imagine this: One day in the future, world leaders will be sitting together to work out a thorny international problem and one of the voices at the table will say “When I was in fourth grade, this is how we handled a global water shortage.”

Sound far-fetched? It’s not, thanks to the World Peace Game students at E’tude Elementary School play every couple of years. Led this year by teachers Amanda Hernandez, Jacie Verstegen, and Nick Scharenbroch, the game gives students a hands-on peek at the way nations govern, plan, work together, and, sometimes, disagree.

“The essential question is ‘How can we better understand each other?’” Hernandez said. “We’re all different. (The game) allows every student a role and a voice.”

The game divides each fourth-grade class into four or five “countries,” chosen by their biome: alpine, arctic, tropical, desert or grassland. Each country has a weather god or goddess, a stock market person, two representatives to the world bank, and one to the United Nations.

They also each have a budget they have to manage, crises to solve, natural resources and disasters to cope with and both mandatory and optional government institutions to fund and operate.

Every day, students read about something going on in the world and have time to reflect on what they think as well as how it might affect their country.

This year’s game, which began halfway through the second trimester and ended with spring break, included a water shortage in the desert nation.

The arctic country decided to melt glaciers and sell water to the desert country. In the meantime, refugees from the desert fled to the alpine country as the tropical country worked on sending aid.

In the end, the alpine nation decided to deport all its refugees and build a wall, leading to research on border walls. The desert nation responded by threatening war if they went ahead with the wall.

The water shortage issue also included some reading on water shortages around the world, which brought it home to some of the students.

“On the first day of the water shortage, I had three or four little girls sobbing, ‘I’m not sure there will be enough water for me,’” Hernandez said. “They’re visualizing the current events.”

And while nobody wants to see students getting upset about what they’re learning, it’s encouraging to see them figure out how to solve problems, work together and get an age-appropriate understanding of the complexities in the world.

Scharenbroch, who devised the game based on one authored by educator John Hunter, said students look forward to the game because of what they hear from older friends or siblings.

“We hear about it (when) fifth-graders say it was their favorite part of the year,” he said. “The game is to build collaboration.”

Each country chooses a name, devises a flag, and writes an anthem, with an assist from Etude High School music students. They also create money, emblazoned with students’ faces, in denominations from $1 million to $100 million.

Their “game board” is a four-level structure depicting space, sky, land, and underwater.

This is the first year Verstegen has taught the game, and she’s been impressed with how her students have embraced it.

“All year kids have been asking to play this,” she said. “My students were very excited. Some students really do catch on right away, while others are like ‘give me the power.’ What I really like is that the whole world works together. Just because we are from different places doesn’t mean we should close our minds off. We can get along with each other.”

Hernandez, who has taught the game twice now, said it is giving students a foundation for future understanding of the world as it grows more and more complex.

“The essential question is how can we better understand each other?” she said. “We’re all different. They are the ones who will inherit it. This game gives them that perspective.”

The game includes a lot of detail: How the world bank operates, what each country’s representative to the UN has to do, how the nations manage their tradespeople and resources, and many other specifics. The students always embrace it.

“The motive is not to incite war but to keep the peace,” Hernandez said. “We’ve gotten a lot of positive comments from parents.”