In Etude’s 1st Grade Space Unit, There are as Many Questions as Stars in the Sky 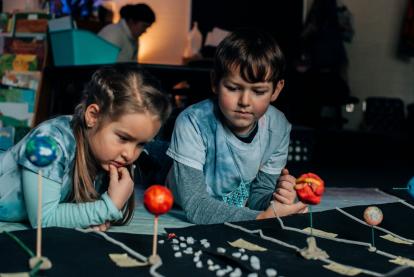 Anyone who’s ever known a first grader knows that inviting them to ask questions can be a mixed blessing. After all, young children are famous for peppering their adults with hundreds of questions every day.

In Logan McLaughlin’s first-grade class at Etude Elementary School, however, that’s exactly what he’s hoping for. It’s the whole point of the space unit, where the students learn about the universe.

A big part of the unit is asking the kids what they want to know, and they never disappoint, McLaughlin said.

“I’ve never seen kids so tirelessly asking questions,” he said. “They have that thirst for knowledge.”

As part of the unit, the students make their own study journal in which every page is a new planet or new concept. They learn the significant facts about all the planets and discuss at length what makes them suitable or unsuitable for people to live on.

A major part of every lesson is the opportunity to explore more, McLaughlin said.

“We ask them ‘What do you want to know about?’” he said. “If we need to take two days to talk about Titan, let’s do it. It’s OK to ask questions you don’t have the answers to. I think we do a lot to help them discover those answers.”

This is the second year for the space unit; before that, the first trimester scientific exploration unit was about monarch butterflies.

The unit is about more than planets and moons (hint: Titan is Saturn’s largest moon), however. They also talk in-depth about things like stars, states of matter, space exploration, the International Space Station and just about any other related topic that comes up.

One of those is the Goldilocks Zone: Earth is not too hot and not too cold, but just right.

Because it’s Etude, the specials classes were related to the theme as well. For music, the students made their own songs about space or the planets. In movement, they developed a routine capturing concepts such as gravity, rotation and revolution. For drama, the class created a fictional story and used expressive actions to show what might happen on each planet.

The current project is about the community, complete with field trips to different kinds of places and lots of discussion about what makes a community.

It’s also a good topic and first graders are invariably interested, but it doesn’t have the oomph of the space unit.

McLaughlin said he has heard from many parents about their kids’ interest.

“There’s something about space that kind of captures the imagination,” he said. “This is not something they put in a box and go home and don’t think about. They’re truly taking it home with them – they share facts and ask questions at home.”