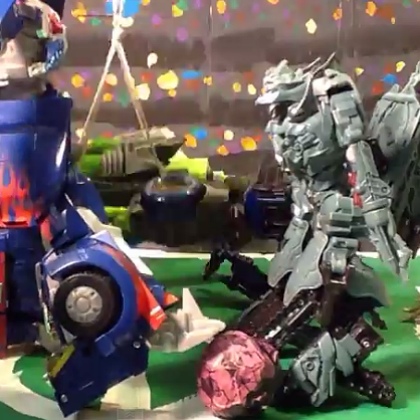 The above exchange was between two young Mosaic animators Graham Russell and Weston Uebelherr. “Potato”... “potahto” was their own invented means to avoid the all-too-common problem of “bad hands” - that is, they are successfully keeping the hands used to maneuver the stop motion characters from showing up in the final animation. Graham’s job was to move the character piece in small increments and then get his hands out of the way. Upon completing this step, Graham would say “potato” to signal to Weston that it was safe to capture the image using the ipad version of the app istopmotion. Upon taking the shot, Weston would say “potahto”, indicating to Graham that he could proceed to move the character the next needed increment.

Animation Sensations is trimester-long exploration of the medium of animation offered each year by The Mosaic  School. Throughout the course of Animation Sensations students view and discuss animation work and produce their own, original animations. To do so students reflect on their learning from other content areas and produce animations related to such topics as the Trail of Tears in Social Studies and kidney stones in Systems Science. Graham and Weston produced an animation related to learning about fitness in their Physical Education class. In their animation the viewer is treated to Transformers competing in olympic events such as weightlifting, soccer, and rowing:

Graham and Weston, as well as their fellow Animation Sensations  classmates developed  projects through a variety of phases, starting with Ideation Phase of developing an idea, Pre-Production phase of  creating a story outline and designing and crafting characters and sets, Production Phase of capturing images for their animation, Post-Production Phase of video and audio editing. Along the way to being successful the young animators encountered many hurdles to jump and problems to solve.

Finally the animation videos had their screening premiers at Exhibitions of Learning (EoL) where students presented their animation along with Academic content learning and a recap of their animation process. At EoLs the animators facilitated a short peer feedback session where they respond to Clarifying Questions, Values, Concerns and Suggestions.