The auditorium fills with anticipation, a sea of teens’ excited voices. They’ve listened to, applauded and celebrated each other’s writing all day. But what did the judges think? The final event at the UW-Whitewater High School Creative Writing Festival is the Awards Ceremony. 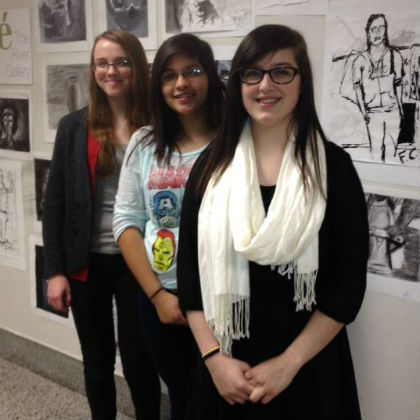 The first judge steps to the microphone: Prose Poem/Flash Fiction category. Honorable Mentions, Third Place, Second Place, with roars of appreciation erupting after each school, name and title. Then, First Place: IDEAS Academy, Hannah Staats! Yelling and applause pours from our own band of writers and the entire crowd as Hannah comes forward to claim her certificate.

A short time later, after a long list of Honorable Mentions and ties for Seconds and Thirds, the IDEAS writers look at each other with worry and wonder before it happens: First Place Multi Media, IDEAS Academy, Kelsey Fick and Sheyenne Morales! Again the wild cheers and applause from the crowd as Kelsey steps up to claim the award. Our spirits are sailing.

The IDEAS students don’t go to the Festival for the awards. We’re not really that kind of school. They go for the feedback, the workshops, the camaraderie, the experience, the college campus, the inspiration, the open mic, the sharing. They lead the way in workshop discussions because that’s what our school is all about. They meet a community of young and professional writers from all over the state. On the bus home they were still making stories and reading poems to each other. They all have gained fresh perspectives.

Special congratulations to Hannah Staats, Kelsey Fick, Sheyenne Morales, and also Tim Olszewski who contributed to the multi media piece! Thank you for working so conscientiously on your crafts of fiction and film, taking it to the next level and putting it out there for a broader audience. We celebrate you and your art!