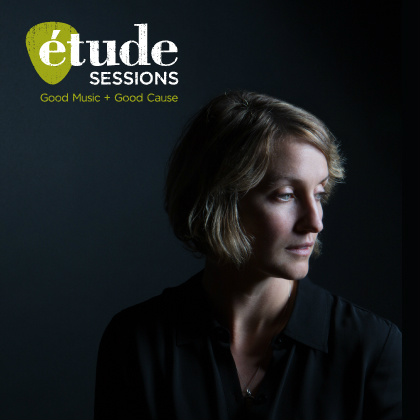 We've been busy celebrating our 10th year of empowering the next generation of changemakers at the schools of The Étude Group, so we have a short line up for Season 5. However, we are excited to be starting the season and the new year by welcoming Joan Shelley to the Paradigm stage.

Her lyrics are as subtle and sensitive as her peerless voice and the band  offers support through restraint and nuance. In eleven songs, this is the sound of Joan Shelley's self titled new album emerges as one of music’s most expressive emotional syndicates.

To get there, Shelley had a little more help than usual. In December 2016, she headed a few hours north to Chicago, where she Nathan Salsburg joined Jeff Tweedy in Wilco’s Loft studio for five days. Spencer Tweedy, home from college, joined on drums, while James Elkington (a collaborator to both Tweedy and Salsburg) shifted between piano and resonator guitar. Jeff added electric accents and some bass, but mostly, he helped the band stay out of its own way. “He was protecting the songs. He was stopping us before we went too far.” she says.

Shelley’s music has never been experimental, at least in some bleeding- edge sense of the word. And she’s comfortable with that, proud of the fact that her simple songs are attempts to express complex emotion and address difficult question about life, love, lust, and existence itself. During “The Push and Pull,” for instance, she precisely captures the emotional tug of war as two people struggle to codify a relationship, her voice perking up and slinking down to illustrate the idea. For “Go Wild,” she wrestles with principles of independence and dependence, forgiveness and freedom, her tone luxuriating inside the waltz as though this were a permanent state of being. These are classic ideas, rendered brilliantly anew.

In their own personal way, these songs are experimental and risky, built with methods that pushed Shelley out of the comfort zone she’s established on a string of records defined by a mesmerizing sort of grace and clarity. The shifts are not so much major as they are marked, suggestive of the same steady curiosity and rumination that you find in the pastoral pining of “If the Storms Never Came” or the subtle romance of “Even Though.” From genesis through gestation and on to execution, then, these songs document transitions to destinations unknown.

“I don’t have a concept, and I don’t know the meaning until much later. Whatever I am soaking up or absorbing from the world, there will be songs that reflect all those thoughts,” Shelley says. “I keep my songwriting alive and sustainable by trying to be honest about how it came out—these are all its jagged edges, and that’s what it is to be human.”

Tickets for are available on Brown Paper Tickets, at the Étude Schools. Tickets are $20 each; student tickets are $10. Additional credit processing fees may apply.