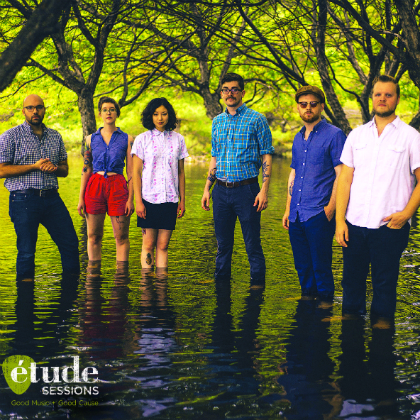 The Étude Sessions Presents: We are the Willows

We Are The Willows are an orchestral indie rock band based out of South Minneapolis. The 6-piece ensemble features songwriter/frontman Peter Miller’s unique countertenor voice and guitar, supported by Jeremiah Satterthwaite (guitar/banjo), Leah Ottman (violin/voice/keys), Hilary James (cello/voice/keys), Travis Collins (bass), and Stephen Lindquist (drums/voice).  We Are The Willows craft dynamic, intimate songs with instruments and voices combining to create energetic rhythms and intricate melodies. Their heartfelt arrangements evoke shared nostalgic feelings of love and loss The band has recently recorded their second full-length album, Picture [Portrait], based off of 350 letters written by Peter’s grandfather to his grandmother while he was stationed in the Southwest Pacific during World War II. Their correspondence inspired Peter to explore themes of family, separation, life, death, and identity in a time of national and personal crisis. The songs communicate complex ideas delivered with pop-sensible charm. His grandmother loves this album. You just might too.

We Are The Willows have received kind words from PASTE Magazine, Buzzfeed, Daytrotter, Magnet Magazine, 89.3 The Current, City Pages, and VitaMN. They continue to have fun playing their music throughout Minnesota, the Midwest, and the wide world beyond. They hope to be the first band to perform on the moon.