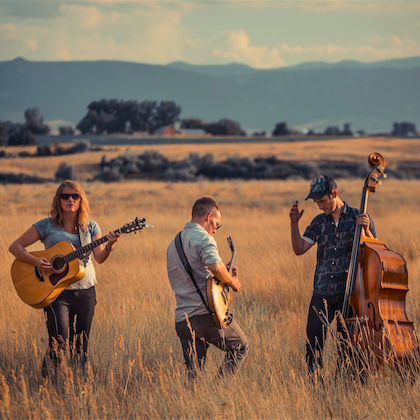 Tickets for this show are $20 Public / $10 Student | Available Online and in person at IDEAS Academy and Paradigm Music and Coffee (Season Tickets are also available.)

Dead Horses is a young acoustic folk band with a cultivated folk sensibility.  Originally hailing from a small Wisconsin town made world famous by a pair of overalls (Oshkosh, B'Gosh), the now Milwaukee-based trio have traversed most of the Great Lakes on the road to becoming acclaimed national touring artists. Since their formation in 2010, Dead Horses have cultivated a roots sensibility well beyond their years due in part to the powerful musical and literary force that is their front woman and songwriter, Sarah Vos.

Raised on Bible Hymns by her preacher father, Vos' backstory sounds more like that of an old bluesman from the Mississippi Delta than a young folk singer from Wisconsin. Vos' gospel, living free and unapologetically, is supported with conviction by Peter Raboin on mandolin and guitar, and Daniel Wolff on double bass.  Dead Horses have crafted a timeless sound, informed as much by modern folk as it is by the classics.

Dead Horses piqued the interest of Ken Coomer (Wilco, Uncle Tupelo) who invited the band to his studio to record their third album, Cartoon Moon. Featuring organ, banjo, harmonium, and Coomer on drums, the forthcoming September 2016 album is a masterful achievement from a band that has come into its own.

"...captures the folk sounds of the late ‘60s. Its disenchanted folk mines a fertile ground that’s bloomed for the past 50 years, and its slow crescendo works as well now as slow, sad crescendoes did for Bob Dylan and Joan Baez in days of yore." -Will RivitzPopMatters  "Cartoon Moon" track premiere on August 11, 2016

"The song is as infectious as it is moving, bringing to mind the folkier material of groups like the Dixie Chicks at their most sensitive and poignant." -Glide Magazine track premiere on August 3, 2016

"Cartoon Moon is not just a good album, it's a great album, and people need to hear it." -Ken Coomer, drummer (Wilco, Uncle Tupelo) in an interview with The Oshkosh Northwestern on May 3, 2016